Congratulations to all who took part in the #Ennisns 2nd class Indoor Hurling League 2018. Eventual winners were the “Kilkenny” team – Emma, Ty, Calvin, Kayla, Samantha & Tadhg. Runners-up were the “Tipperary” team – Tiernán, Aydin, Harlow, Jaime, Lenka, Kaylum, Daniel & Seán. The pupils really enjoyed taking part – here’s what some of them had to say:

“I loved the indoor hurling league – it was so much fun! I learned so much about hitting on the ground. Most of the people on my team were from my 2nd class except for one. Even though I didn’t like to share my helmet it made my day to see someone else happy. Sure we lost matches but it was good to see so many teams happy.” Amy, 2nd Class

“I really liked when my team won some games. It was really fun. I like when Mr Kelly was announcing all the winners too! My team did well. We were called Galway and my favourite match was against Limerick. We won 4-3! Most of the people from my class did the league too so that made it extra fun.” Laura. 2nd Class

“The hurling league is where people in ENS go into the hall for hurling games. You go into different counties like Dublin, Clare and Tipperary. There was 6 counties in the league. I was on Tipperary. And you know why I liked it? Because you get to meet new friends! And new people! Its very fun too.” Tiernan 2nd class.

Many thanks to Mr. P. Kelly for organising the league each year. 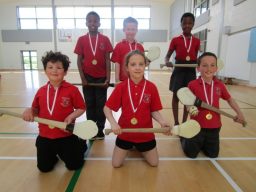 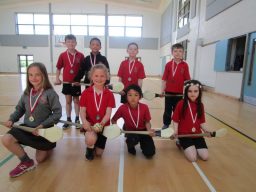 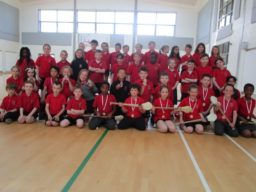